A football player named Brady Oliveira has a stellar record that promises him a bright future in his field. In 2019, he made it to the Canadian football League (CFL) Draft. He is also expected to start the 2022 season playing for the Winnipeg Blue Bombers.

But Oliveira isn’t just popular among football fans. He has also established a positive reputation among dog lovers around the world after saving three dogs from their impending doom.

Saving the mother dog and her puppies

One of Oliveira’s TikTok videos documented his journey to save a mother dog and her puppies after severe flooding hit their area. The three pooches were trapped in a house that was surrounded by floodwaters. Apparently, the people living in the neighborhood had already evacuated, and some were unable to bring their pets with them.

Arriving at the flooded neighborhood, Oliveira and Edmonton Elks player Shai Ross walked for over 15 minutes through the ice-cold water to reach the dogs. After making sure that the mother dog was all right, they continued inside the house where they located two puppies in a locked bathroom. It appeared that these little pooches had been there for more than 24 hours with nothing to eat.

The kind rescuers placed the pups in a hamper. Oliveira picked up the mother dog, and the group commenced the long yet slow walk back to safety.

One commenter thanked Oliveira and Ross for rescuing the dogs, adding that the world needs more people like them. Another said that the mother dog knew that Oliveira was there to help her and her babies. Pop star Lance Bass also commented, hinting that the video made his eyes teary.

One of the craziest rescue missions that I’ve been on! I received an alert about a dog & her 2 pups being left on a property where the community was evacuating due to the severe flooding! Pups were locked in the bathroom for 24+ hours covered in their own urine & fecies. Mom was locked outside with nowhere to go! 💔 Walking in the ice cold flood waters & getting hypothermia was one for the books! Welcome to the goodlife 🐾 #heartwearming #abandoneddogs #dogrescuer #dogrescuestory #savedogslives 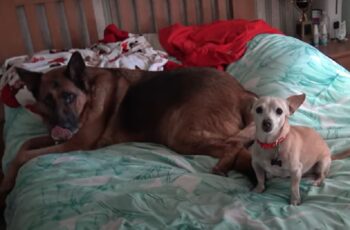 JoAnn and Alex, volunteer rescuers of the charitable group Hope … 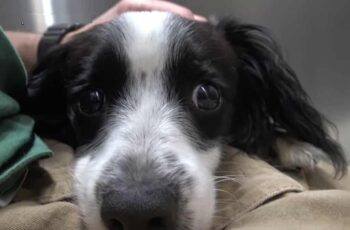 Tux was a homeless dog that struggled for a long …