It was a frigid winter morning when a truck driver saw something cruel and terrifying on his way to a delivery. He was on Interstate 81 in upstate New York, driving behind an old Dodge SUV. Then suddenly, the vehicle slowed down a bit and swerved near the side of the road. A man sitting in the passenger side then threw two dogs outside, one after the other.

The truck driver was stunned. He saw that the dogs landed rough, and they were certainly hurt. He immediately pulled his truck over and got out to help the poor pups. As the older dog was severely injured, he decided to call for help. Soon, the state troopers arrived at the scene.

After receiving some first aid, the two dogs, which turned out to be Beagle mixes, were brought to the local shelter. One of the pups was around eight years old, while the other was around a year old.

The older one had more severe injuries. His body was riddled with broken bones, and his fur was shredded. He was bloody all over, and one of his legs was badly injured. They named him Trooper.

The younger pooch escaped with only minor injuries. He had several abrasions, but he didn’t break any bones. They named him Adam after the truck driver who saved their lives.

The medical team noted that the dogs had older injuries. This indicated that they were abused.

Because of Trooper’s condition, he went to a foster family where he could get round-the-clock care. Adam stayed at the shelter. But once the older pooch recovered, he moved back with his friend. When they both fully recovered, they were put up for adoption. Applications started flooding in.

Soon, the shelter staff found a loving couple from Earlville, New York, who wanted to adopt the pair. The new owners said that the two dogs were very friendly and happy. It was as if they didn’t go through a tragic experience. 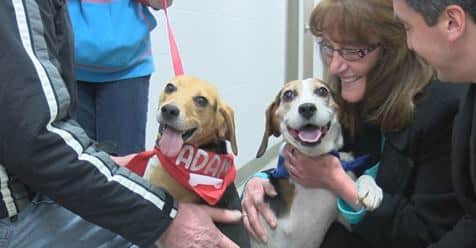 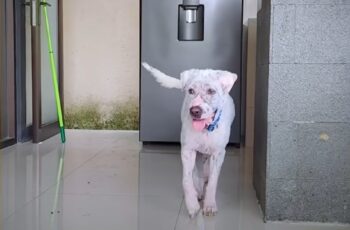 Homer was a stray dog that sought shelter at a … 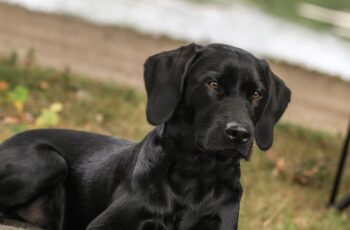 Taylor and Amber Newsom were tucking their daughters in bed …