A group of kids, varying in age, was walking around their Los Angeles neighborhood when they saw a black dog with severely matted hair. The dirty pooch was lying motionless next to a dead tree in an open lot.

The children thought that the unkempt animal was already dead. But then, after a few moments, the creature stirred.

The kids were delighted to see that the pup was still alive, so they immediately called for help. They got in touch with several dog rescue organizations. Some said that they needed to make a donation first before they would come and help. Thankfully, Hope for Paws, a rescue group known for their videos online, heeded their plea for assistance.

The group’s founder, Eldad, and another rescuer named Loretta, quickly headed to the California suburb. When they arrived, the kids were still there, waiting along with the homeless dog.

Loretta gently went near the stray and gave him some food. Although the pooch was visibly scared, he did not run away. As he was eating his meal, the rescuer slipped a leash over his head. But once the pup realized that he was caught, he jumped and started barking.

The two kind rescuers immediately tried to calm him down. They rubbed his head, trying to ease his anxiety. Eldad and Loretta stayed with the dog and the kids for a while before taking the pooch to their vehicle. Before they left, they thanked the kids for calling them.

Once they were back in their facility, the rescuers spent hours removing ticks from the dog and grooming his fur. They also gave him a bath and a nice place to get some sleep. They also named him Nobu.

Once the dog was awake, he was very different from when they first met him. He craved attention and love. Nobu would demand to be snuggled and would lay his head on his rescuer’s lap.

Before long, Nobu got adopted. He loves his new home and his new siblings. Thanks to some kind kids, the dog now has a life worth living. 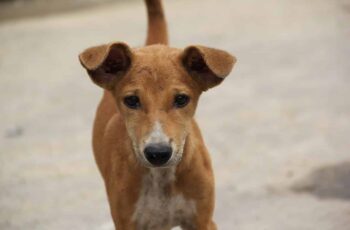 For Takis, saving dogs is his sole mission in life. …

Taylor and Amber Newsom were tucking their daughters in bed …